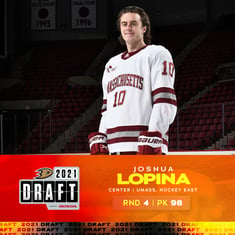 Sean had an amazing run at the NTDP, getting "called up" to the U18s midway through his U17 season. And then last season, he followed it up with another amazing season, including to be named to the US Men's National U18 team.

"Sean has an unbelievable compete level and the skills and hockey IQ to go with it" said Bridgedale Headmaster Mike McPartlin. "He is always willing to challenge himself to go against the best. He has the heart of a lion." 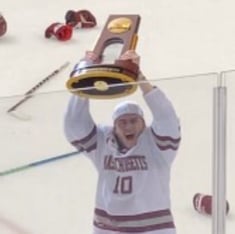 Josh competed for the USHL Lincoln Stars before stepping into a strong UMass program and immediately establishing himself as the team's second line center and top face-off man. That he was a major contributing factor in the team's unprecedented success is borne out not only by his Rookie of the Year award but also by the amount of ice time he logged during the team's run to its first-ever national championship.

"Josh has quietly excelled at every level he's played," said McPartlin. "As an '01 he might be regarded as something of a late bloomer, but his savvy and his confidence, along with his work ethic and determination, have always defined him and his game. He's a winner."

"We at Bridgedale Academy couldn't be prouder of these two fine young men," added Bridgedale Academic Dean Christina Di Pauli. "We wish them the very best and know they will continue to achieve excellence, not only in their hockey careers but also in their lives."

We are now enrolling students for the 2021-22 school year.

Bridgedale Academy is an all-boys school for athletes, a prep school for serious youth hockey players, offering grades 5 through 8 each school year. In addition to our winning combination of sports and academics, we focus on leadership training. We use a classical academic curriculum and our graduates go on to attend some of the most prestigious high schools in the country, including Lake Forest Academy, Culver Military Academy, Shattuck St. Mary’s, Northwood School, Benet Academy, Fenwick Prep, St. Ignatius Prep, Marmion Academy, St. Francis Prep, Latin School and Providence Catholic. We pride ourselves on being the top youth hockey prep school in the nation and our hockey successes are many: Twenty-two (22) of our former or current students have already received their NCAA Division 1 college hockey commitments, with many more sure to follow soon. Seven (7) of our grads have competed for USA Hockey’s National Team Development Program. Our grads now compete for their respective D1 and D3 teams, including Notre Dame, Wisconsin, U Mass, Colorado College and others. Two of our grads have recently signed their entry-level contract with their respective NHL teams, the New York Islanders and the Anaheim Ducks. Several other Bridgedale grads are now playing junior hockey, including in the USHL, the OHL and the NAHL.