Two Years in a Row with a Bridgedale Grad Winning! 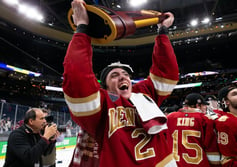 It was the ninth national championship for the Pioneers, tying for the most all time and capping off another amazing DU hockey season.

Both Sean (#2) and Jack (#4) are true freshmen, having played together the last two years at USA Hockey's National Team Development Program.

To win it all, DU had to beat a dominant Minnesota State University team with another Bridgedale connection, as their Hobey Baker winning goalie Dryden McKay is the son of Bridgedale goalie instructor Ross McKay. 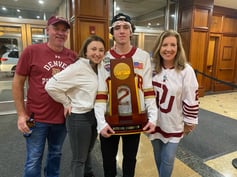 Sean was drafted by the Colorado Avalanche in last year's NHL Draft. He was selected 61st overall in the Second Round.

Jack, who won't turn 19 until October, is eligible for this summer's NHL Draft and is likewise expected to be a  high draft choice.

"Both Jack and Sean were exemplary student-athletes at Bridgedale," said Bridgedale Headmaster Mike McPartlin. "They arrived to school each and every day with an excellent attitude and with a determination to take advantage of the opportunities their parents presented them with by sending them to Bridgedale."

"Both these young men are class acts and testaments to their wonderful  parents."

Jack's parents, Ted and Val, and Sean's parents, Kyle and Caryn, of course made the trips to Loveland, Colorado for the regionals and then to Boston for the Frozen Four to cheer their sons on. (You can see them pictured after winning,  posing with their sons and daughters to the right.)

Bridgedale Academy is proud to congratulate these two fine young men and their families.

And if you would first like to see Bridgedale for yourself, and do some classroom observations to see our teachers and coaches in action, please click the CTA below to set up your own Bridgedale Academy Private Showing.

Enrollment for the 2022-23 school year at Bridgedale is already underway. And we continue to accept transfer students for the 2021-22 School Year.

Bridgedale Academy is an all-boys school for athletes, a prep school for serious youth hockey players offering grades 5 through 8 each school year. In addition to our winning combination of sports and academics, we focus on leadership training. We use a classical academic curriculum and our graduates go on to attend some of the most prestigious high schools in the country, including Lake Forest Academy, Culver Military Academy, Shattuck St. Mary’s, Northwood School, Benet Academy, Fenwick Prep, St. Ignatius Prep, Marmion Academy, St. Francis, Latin School and Providence Catholic. We pride ourselves on being the top youth hockey prep school in the nation. More than (20) of our former or current students have already received their NCAA Division 1 college hockey commitments. Seven (7) of our graduates competed for USA Hockey’s National Team Development Program. Several have been NHL-drafted and two have already signed their entry-level contract with the NHL. Numerous Bridgedale grads are now playing NCAA D1 and D3 hockey as well as junior hockey, including in the USHL, the OHL and the NAHL.