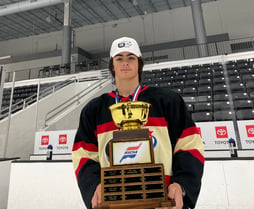 Nick and his twin brother Jake attended Bridgedale Academy for four (4) years, and are now juniors at St. Francis High School in Wheaton. Jake, a left-shooting defenseman, opted to play AAA hockey with the Chicago Fury.

Nick took the high school route, representing St. Francis on the combined Wheaton West team and earning Illinois High School All-State Honors, one of only 7 juniors to do so. He also competed for the Sabres Central States U-18 team, a state semi-finalist. 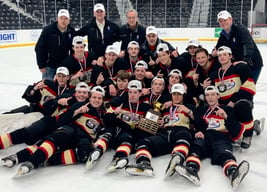 "It's great to see Nick and Jake having so much success with their hockey and at school," said Bridgedale Headmaster Mike McPartlin. "They were amazing to have at Bridgedale, always giving 100% in their academics and athletics, and always excelling from a quality of character perspective too."

"Nick and Jake were our first student-athletes to attend four years at Bridgedale," added Bridgedale Academic Dean Christina Di Pauli, "and they were both so kind and respectful. When they first started at St. Francis we were going through withdrawals missing them so much. But it's been great keeping in touch and seeing them be so successful. We are very proud of them both."

Congratulations to Nick (and his parents Sean and Nicole and brother Jake) on his America's Showcase Championship.