Maximize the chances of making the team

Although AA tryouts won’t begin until September, there is no time like the present for youngsters to get serious about their hockey training and begin preparing themselves to be at their best.

Eating healthy and being in top physical condition are of course just the starting point as you prepare for AA tryouts.

This article discusses the following 3 ways to really prepare, ways that go above and beyond merely eating healthy and being in top physical condition:

Let's look at each in a little more detail.

Once school starts back up, youngsters will begin to fall into more of a routine in their daily lives. But frankly, it is the weeks leading up to school during which most of the preparation for tryouts must take place.

And so, first and foremost, and even before school starts back up, getting into a pre-tryouts “regimen” is important.

If possible, get a hold of your team’s tryout schedule as soon as possible. And once you know it, begin immediately to adjust your own “pre-tryout training” schedule to match up with it.

In other words, if you know that most of your team’s tryout sessions will take place at around 7pm in the evening, you will want to adjust your own schedule so you are most ready to train and compete around this time of day.

Three (3) important “Whens” (of your daily schedule) should be adjusted:

1. When you train: Time your pre-workout warmup, as well as your actual workout, to align with the tryout schedule.

2. When you eat: Time your meals, e.g. two hours prior to your tryouts-adjusted warmups and workouts.

3. When you sleep: Get enough (but not too much) sleep, i.e. be refreshed and ready to go when it matters. 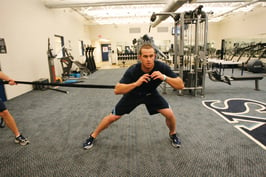 Now, it very well might be that, in the weeks leading up to tryouts, your daily schedule will not match up perfectly with your family’s daily schedule.

And of course once school starts up you might have to work around that too.

But look on the bright side: once you’ve made the team, you can get back to your normal schedule.

Virtually every great player I’ve ever spoken to about this has been able to name one particular thing they did when they were younger that “made the biggest difference” in their development as a player, i.e. something that revolutionized their game. 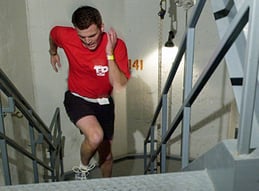 I like to ask that question of great players because, when I was younger, I myself had such a “wow” moment.

In my case, it was choosing to run the stairs of a 10-story building every other day for four weeks. Each of my workouts lasted about 60 minutes and I wore ankle weights. I went up and down the stairs: forward, backward, sideways, cairoca, 1, 2 and 3 stairs at a time (and yes, I kept my hand on the rail when going down the stairs).

And I didn’t skate once during this entire time. But the next time I stepped on the ice, it was definitely a “wow” moment. 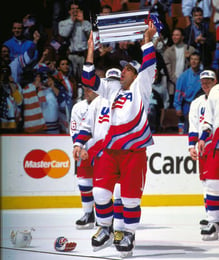 NHL Hall-of-Famer Chris Chelios told me his “wow” moment came after training with resistance rubber bands for a month to improve his explosive leg power and lengthen his stride. Also off-ice.

Fury AAA coach John Varga (who still holds the career scoring record for an American playing major junior hockey) said he had two such moments. The first was at 8 years old on-ice when he would try to emulate the skating strides of speed skaters. The second was when he was 18 going through the Washington Capitals’ off-ice training camp for rookies (at the time no other NHL teams did this).

The point is that, with dedication and honest effort, every youth hockey player can in a short time make such a “leap forward” in his game.

And as proven in the above examples, it doesn’t have to be on-ice.

Every young player should definitely be working off-ice every day on his puck handling and shooting skills. But working on one specific thing, and doing the honest work to make a real leap forward, can definitely be a game-changer.

A lot has been written about the importance of “visualizing” in sports, and about how valuable it is to an athlete’s success.

In the context of trying out for a AA team, a youngster will of course want to visualize making plays successfully during the tryout’s scrimmages. But he will also want to visualize hearing from the team’s coaches at the end of tryouts (or earlier) that he’s made their team.

Look at pro golfers. In addition to visualizing the shots they will make as they make their way around the course, they also visualize being crowned champion at the awards ceremony. Because it helps build a confident mindset that has them expecting positive results. They don’t all always win of course, but they all want the positive feeling going in that winning will indeed be their end result.

And having such a positive outlook on things will obviously also help a youngster be mentally ready to compete at tryouts.

If, in addition to eating healthy and being in top physical condition, the youngster:

then he will be giving himself the best chance to earn a spot on his team of choice.

Bridgedale Academy is now accepting applications for the 2018-19 School Year.

Bridgedale Academy is an all-boys school for athletes, a prep school for serious youth hockey players. We will offer grades 5th through 8th in the 2018-19 school year. In addition to our winning combination of sports and academics, we focus on leadership training. We use a classical academic curriculum and our graduates go on to attend some of the most prestigious high schools in the midwest, including Lake Forest Academy, Culver Military Academy, Shattuck St. Mary’s, Northwood School, Benet Academy, Fenwick Prep, St. Ignatius Prep, Latin School and Providence Catholic. We pride ourselves on being the top youth hockey prep school in the nation. Thirteen (13) of our former or current students have already received their NCAA Division 1 college hockey commitments. Three (3) of our former students competed for USA Hockey’s National Team Development Program and will begin their college playing careers in 2018-19, two at Notre Dame and one at Michigan.