Kaden's dad John (himself a great player in his day and now a coaching fixture on the Illinois Tier 1 AAA youth hockey scene) talked about how this wonderful opportunity for Kaden came about.

"My father and ancestry is from Hungary," said John, "and a close hockey friend of mine helped Kaden pursue the interest of multiple teams and we had great feedback and options. 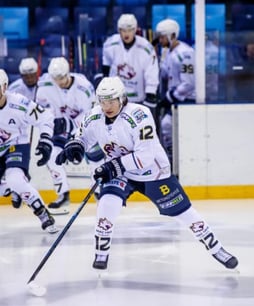 "In the end he chose MAC Budapest, (a team) with an amazing group of D-men who are on the Hungarian National Team. He's surrounded by very good people and experiencing a very cultural city in Budapest."

“Kaden was only with us for one school year but he made a big and positive impression on everyone here,” said McPartlin.

"He was a recipient of our Ductu per Agone (Leadership through Athletics) Award while here, emblematic of his high quality of character that we knew would lead him to succeed in whatever he did."

Congratulations to Kaden (and his parents John and Kelly) on professional hockey debut with MAC Budapest.